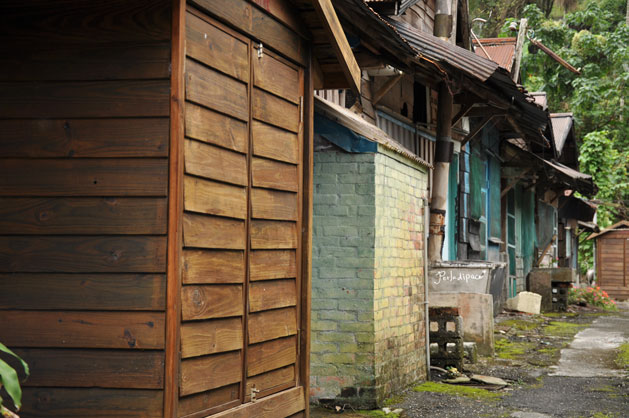 There is a place named Morisaka. It\'s a place deep in the tall mountains and perfumed by fresh and living pine trees. We went from deep in the mountains to the bustling sea port in the afternoon where chefs from restaurants flock to returning fishing boats for... (continue reading...)

Went to the Lichuan Fish Farm (立川漁場) for the special kind of clams here. Normally you can pay a small fee and go dig clams in this water. But we wouldn\'t really do that here because it was FREEZING out there.

這有個小型的 "蜆" (clam) 博物館。 其實我們主要來這是要喝薑絲蛤蠣清湯.
There\'s a mini "clam" museum. But really.. we were there for the clam soup.

路邊的野花。
We stopped in front a field of wild flowers.

Fields of yellow/orange flowers. There were fields of yellow flowers last time we drove on the same highway.
上次我們來時經過的是一片片黃色的花海. 這次是比較小片的橘色花海.


There are lots of small stands selling local things in the park. Many of them still live here. We got a few pieces of these blocks of Hinoki wood. The smell is strong and pleasant that you\'d feel you\'re all the sudden brought to a forest just by smelling it. That\'s how cool it is.

The Lintianshan Forestry Culture Park. This place is named "Lintianshan" and also known as "Morisaka" during the Japanese occupation era. The black and white photo in the photo above are houses in this small town built in the early 1900s to accommodate workers in the prosperous forestry business. These houses (a small portion of the town) were burnt down in a fire.

機關車庫. 以前用來運輸物資＆木材的機關車.
The old trains that were used to carry goods and wood in and out of the area.

林業文物展示館裡一些和當時林業蓬勃時和生活與工作的種種.
The museum inside the park exhibits everyday things used by the people living in the good old times here.

我們有職業病，看到和我們平時工作有關的 "多看" 一眼, 看看是哪家做出來的古董。
We\'re a bit workaholic. Can\'t help it but wonder which company made this antique. & So it happened to be Puritan Bennet.

在台灣的小學時期才看得到的小踏板風琴。我們好歹也是那樣一路走過來的。
The kind of small pedal piano-like thing (but it works more like a accordian with the foot pedals?!) that we saw when we were in elementary school. Each classroom would have  one of this to be used during music class.

Walking into the old alleys where the old dorm buildings built for workers in the forestry industry still stand now. Some of these old houses are still occupied.. but mainly of elderly who don\'t want to leave their home town.
走進日式宿舍區. 這邊的一些舊房子仍有許多人在住. 大部分都是捨不得離開這裡的老人.

這舊日式社區是個隨便拍照都可以看起來很唯美的地方.
This place is ideal for photo-shootings because it\'ll look pretty almost from all angles.

零亂 - 但訴說著過去.
Every piece is a story teller. Every place has its story.

這邊附近曾發生火災，木製的房子都燒光了。只剩燒不掉的房子地基. 這邊幾間是火災紀念館. 但門卻是封起來的 & 裡面像廢墟...
The place where I took this photo was a site that was burnt down by a fire some decades ago. There\'s a memorial hall but it is deserted, locked and looks more like ruins.

外面還貼著賣土產 menu 的老房子. 不過看起來人去樓空.
There is a sign with red writings telling people what they sell here (largely local snacks and eats in general).. but as you can see, there\'s nothing here. Not sure if this place just never managed to survive that or it hasn\'t been reorganized and refurnished yet.

小學司令台上的記憶.
Recalling memories on (or rather standing facing it 98% of the time) the command post(?) of our Taiwan elementary school years. It\'s a daily thing.. the whole school has to march to the plaza in front of the command post, sing the national anthem, raise the national flag (& sing the song that goes with it) and listen to the principles and important people on the board of the school lecture. We loved it when it rained because that meanat we didn\'t need to stand under the blazing sun (couldn\'t really change our standing position - it was rather military-like). This is true of all schools in Taiwan, even up to this day.

做早操～！
Morning exercise~! That was what we did as well. Forgot about it. xP

A old rail track. But we didn\'t dare to walk on it this time because this thing hasn\'t been maintained/repaired.

這邊新建的中山堂旁的一些自然木作品 .
Wood trunks in its natural form on display here in this area of the park.

This used to be the dorm of the managers of the forestry business. It was built in the style typical of Japanese houses built in the Japanese occupation era. If you have followed my Taiwan posts, you would\'ve probably realized a lot of the older prosperous towns have lots of remains of the Japanese era.

Undeniably, Taiwan would not be where it is today without that period of history of colonization and exploitation of Taiwan natural resources (for export) by the Japanese. With the newest technologies passed over from Japan at the time for rapid investigation into the territories, location of valuable natural resources and construction of railways and the most efficient transportation network, this colonization by the Japanese, in the end, brought prosperity and built the foundation for technological advancement for the next generations.

現在這房子已經被翻修成一個氣氛很棒的咖啡廳. 在這邊可以放鬆心情, 坐在窗口看一個下午的書和品茶.
This place has been renovated and converted into a nice cozy cafe. It\'s the kind of place where you can sit by the window and read for the whole afternoon.

We were planning to go to Taroko. But then considering that there was just one large earthquake the day before, perhaps it\'d be wise not to go in because there could be rocks falling off here and there from the tall steep mountains.

這邊就是產石頭. 而且是很硬也很漂亮的花崗岩.
This place is famous for its beautiful granite.

Stopping for a scenic spot on the Suhua Highway. See the black strip around the "waist" of the tall mountains? That\'s the Suhua Highway. As I said, it just winds its way around the mountains. This highway usually gets shut down due to fallen rocks (huge ones) or collapsed  lanes when there\'s a major typhoon.

Were going to the Suao Fisherman\'s Wharf for lunch but we ended up at the Fish Market at its rush hour and we saw the main chef of the Teppanyaki restaurant. It\'s almost like our second kitchen in I-Lan. :p  So we all just hopped off and went after him. The first post I wrote about the restaurant: Shen Yen Interactive Teppanyaki

Shipyard and the sea birds on fishing boats.
海港旁的船廠和跟著漁船進港的海鳥.

Busy shoppers during the rush hour by the sea port when fishing boats return with lots of goodies.
下午的這個時候是漁船回來的時間.. 所以知道的人就會在這時衝出來搶一等魚貨.

Picking the good ones!

讓你挑！
Choose what you want!

Lots of pretty and fresh looking fish that can be found on the east coast of Taiwan.
很多很漂亮的魚.

When a fishing boat comes in, it just pours its stock of fish out for people to choose. The usually go out really fast. Some of them don\'t even get to get splashed out like this because a buyer has already made a deal with the fisherman before the boat came in.

圓花鰹  (又名炸彈魚) 在秋末是最肥美的.
A kind of bonito that is often found along the eastern coast of Taiwan. This kind of fish is nicknamed the "Bomb Fish" because of its body shape.

A book that I came across some time ago in Eslite and decided to finally start reading it. It has quite a lot of good information on the kinds of fish to see in fish markets in Taiwan.

My Past Related Posts: